Home › Impressions › The Old Man and the Sea by Ernest Hemingway

The Old Man and the Sea by Ernest Hemingway 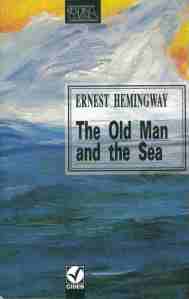 Opening Sentence:He was an old man who fished alone in a skiff in the Gulf Stream and he had gone eighty-four days now without taking a fish.
Synopsis:The short novel The Old Man and the Sea (1952), winner of the Pulitzer award, was written by Ernest Hemingway at the end of his writing career. At the centre of the novel is the epic theme of the conflict between man and nature. The main character Santiago, an old, unlucky fisherman, engages in a hard battle with the sea in order to defend his prey. Nature, however, eventually prevails.
Genre:Classic
Rating:@@@@@
Pages:84
BCID:xxx-2927271
ISBN:88-7754-074-5
Year:1992
Format:Paperback
Comments:Wow. That’s all I could think when I finished this story. Wow. The language was just beautiful. The themes that played out in the old man’s mind, and in his struggle with the sea, are ones that resonate with all of us. Courage in the face f adversity, the struggle to tame nature or to simply to survive and the determination to succeed are all themes we can relate to. As is the spectre of our ageing bodies being unequal to the tasks at hand. The Old Man and the Sea is a sad story that will easily withstand the ravages of time.