Home › Impressions › Mummies: Unwrapping the Past by Rosalie David

Mummies: Unwrapping the Past by Rosalie David 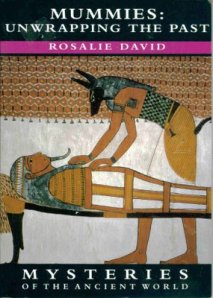 Opening Sentence:The word ‘mummy’ was originally used to describe the preserved bodies of ancient Egyptians.
Synopsis:Death was simply the passage into the country of the Gods for the ancient Egyptians. To reach the afterlife, the body had to survive for eternity, and thus the practice of mummification arose. Ever-more sophisticated scientific procedures have allowed us to learn about the daily lives – as well as the deaths – of this remote world.
Genre:Non-Fiction
Rating:@@@
Pages:39
BCID:xxx-4672975
Year:1997
Format:Paperback
Comments:Mummies: Unwrapping the Past is short, but it manages to cover a lot of ground. Punctuated throughout with pictures and photographs, this book explains what mummies are, various mummification processes (and the reasons behind it) and the scientific techniques used to study mummies. Written in language simple enough for the layman to understand, this is the perfect introduction for teaching children about the world of mummies.