A Book You Wish You Could Live In 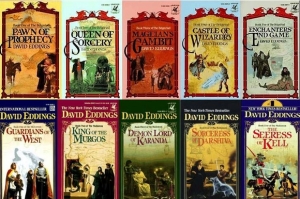 I have read several books I wish I could live in – mostly in the fantasy genre. The book I would like to live in most, however, is not a book but a series. I would love to live in the world created by David and Leigh Eddings as a setting for their fantasy series The Belgariad and the follow-up series The Mallorean. Despite the dangers I would dearly love to befriend such characters as Polgara, Belgarath and Prince Kheldar (aka Silk) and to play a role in the world-changing events they endure.

While I am not a brave person and I would not wish to experience the death or maiming of a friend or loved one, or witness the atrocities of war, I do think that the lack of real dangers in today’s west have resulted in us living out relatively boring, mundane lives. I believe this is why I enjoy the fantasy, horror and thriller genres so much – I am living the adventure vicariously. I have no data to back this up, but I believe this also accounts for the popularity of extreme sports and the rising rates of depression.

Don’t think I am fooling myself – I know that life in these novels would not be a bed of roses. Sometimes, though, I feel like the trade-off would be worth it.