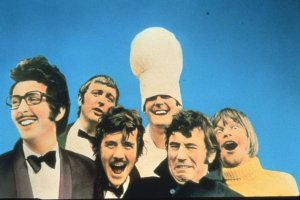 One of the most iconic symbols of my childhood is Monty Python, which is ironic given that most of their stuff was released either before I was born or when I was far too young to either understand or remember. However, Dad was a Python fan, so I grew up watching films like Life of Brian and The Search for the Holy Grail. I then married a man who can quote large passages from various sketches, so I developed a taste for those aspects of Monty Python that my father either didn’t enjoy or chose not to show me.

A couple of the songs on this list will be considered unacceptable by today’s standards and I held an internal debate as to whether they should be included. In the end, I decided to go with it since they really are my favourites and I could not find anything that I like enough to replace them. Besides, I can handle a little hate mail!

Now that has been said, here is my top ten list of Monty Python songs, from ten to one:

Always Look on the Bright Side of Life

Never Be Rude to an Arab

The Tale of Sir Robin

Every Sperm is Sacred

Tags: Always Look on The Bright Side of Life, Every Sperm is Sacred, Galaxy Song, humour, I Bet You They Won't Play This Song on the Radio, I Like Chinese, Monty Python, music, Never Be Rude to an Arab, Penis Song, Philosophers Song, The Silly Walks Song, The Tale of Sir Robin, Top Ten