He was short. That’s what caught my attention. I’m a fairly average height, but he barely reached my shoulders. Otherwise, the guy was unremarkable. Dark hair, blue eyes, handsome but not gorgeous — if not for his height, few would spare him a second glance.

When he first showed up wanting nothing more than a small mark on his arm, I thought he was a bit odd. Most of my customers request a name or a phoenix or some kind of Chinese character they can point out to their mates and pretend means something wise. I asked if his line had some kind of special meaning or in-joke, but he just smiled in response.

I recognised him instantly when he came back a couple of weeks later. His face may be ordinary, but his height was definitely memorable. He wanted an identical mark, parallel to the first. Again, I asked after the meaning only to be answered with a smile.

Thus began a pattern. Every couple of weeks, he would show up, asking for another simple black line. Each time I would ask about the meaning, my inquiries always answered with a smile. His fifth visit gave me the hint of an answer. Instead of the usual vertical line, he asked for a diagonal line intersecting all the others.

By his tenth visit, I knew my guess was correct. They weren’t just lines, they were tally marks. On his twelfth visit, I asked him cheekily if each mark represented a lay. As usual, my only answer was a enigmatic smile.

The visits continued. Every couple of weeks, he would arrive, pay for his tally to increase, and leave with a mysterious smile. I didn’t realise how much a part of his routine his visits had become, until they stopped.

There was no warning. Every two weeks, for over three years, he showed up. Then, after his tally reached one hundred, I never saw him again. I still wonder about him, you know. Why did he start coming? Why did he stop? Where is he now? What was he counting?

I thought I saw him last night. He looked just how I remember him. It wasn’t him, of course. It couldn’t have been. It’s been forty years, after all. A relative, perhaps? He was standing on my stoop, in front of the window. He was the same, yet different. He still had the dark hair, the blue eyes, the diminutive height, only now his eyes were cold, his expression foreboding, his smile vicious.

Once again I consider those long ago tattoos and recall my comment about romantic conquests. It occurs to me that there are many less innocent explanations. I am still curious about the marks, but for the first time, I wonder if I really want to know. For the first time, I fear I may find out. 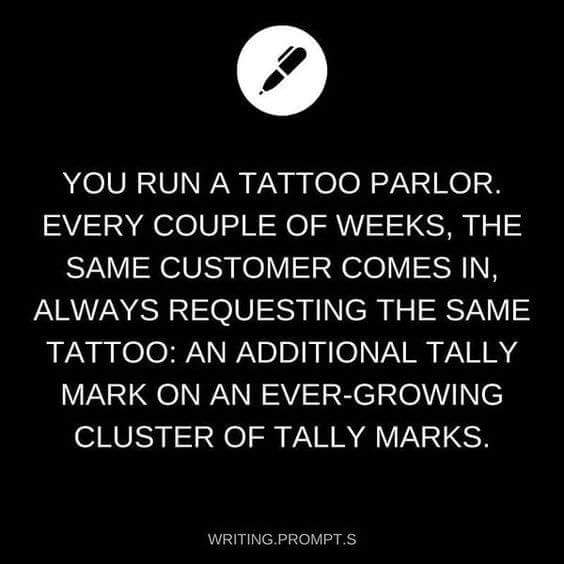